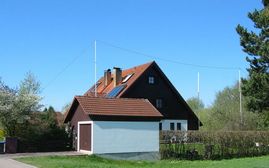 No matter what transceiver you are using, the antenna has the biggest impact on the performance of your amateur radio rig. If you want to have one single simple antenna for all the common bands from 80 m to 10 m, there are not many alternatives, though. Since vertical aerials depend on an excellent earth, they are typical candidates for TVI and are also susceptible to man-made noise.

So I concentrated on horizontal antennas, but also avoided types with traps like the W3DZZ since I often heard that the traps cause problems with rain and snow.

However, at first the receiver often showed noise up to S3 on 20 m and even S5 on 40 m when the antenna was too near to the house. This noise floor was obviously caused by TV sets and computers nearby. Another problem was that when transmitting on 80 m, my voice came out of some analogue telephones in my house which are connected to a small ISDN PBX. Moving the antenna a few meters away from the house solved the problem. It also seems to be useful to ground the coax shield on the transceiver side of the choke which further reduces HF on the cable.

The plot shows the current distribution on a 42 m long FD4 Windom antenna for the frequencies 80, 40, 20, 17 and 10 m. Note the circled area at 1/3 length - this is where the impedance is about the same for all these bands.

G5RV: Popular but not easy to tune

To be honest, the impedance is far away from 50 ohms on all amateur radio bands, so a tuner is mandatory. An ATU (automatic tuning unit) is quite useful since it matches the antenna within a few seconds by simply pressing a button. Using the G5RV antenna, I tried several variants:

The length of the coaxial cable (which transforms the impedance) is very critical. There are some comments saying that the coax cable should be at least 20 m long: This is definitively wrong! A long cable would lower the VSWR simply by its HF attenuation which is not desirable.

There are no miracle antennas!
Be sceptical if somebody tells you that his antenna is much better than another one with a comparable size. It may be true for a specific direction due to different radiation patterns. Other directions will show the opposite. Many small aerials (like the often-discussed EH antenna) also radiate much power from their coax feeder line, causing many problems and making it impossible to compare them honestly with other types.

Be careful with prejudices against a specific antenna type. Some people say the off-center fed FD4 tends to cause TVI (television interference) though they never tried it themselves. Often the same people do not hesitate to use a G5RV or a dipole without a balun, which is unsymmetrical as well. Any good antenna being too close to a house can cause interference.